Boycotting Air France for shipping monkeys to laboratories; but not SAS for serving animal foods?

PETA posted a new campaign about Air France and how they are transporting monkeys to vivisection-laboratories.

They encourage nonvegans (an vegans) to protest vivisection-laboratories, lauds nonvegas for their compassion when they boycott "Air France". These very nonvegans will take another flight and participate in the very same animal exploitation that they claim to object by consuming animal foods on their airplane. Vivisection, which is exploitation and morally wrong - but not transparently frivolous, will continue as long as people think it is justified to harm animals for completely frivolous reasons, such as palate pleasure or convenience. PETA is launching a never ending amount of single issue campaigns that doesn't change anything. They are not attacking the root of the animal exploitation-tree, but the branches of it.

My reply to a person commenting on their thread that she will boycott Air France:

Sophia,
Everyone on this thread agrees with that it is wrong to inflict unnecessary harm on animals.
Airlines sell animal foods.
We have no nutritional need for animal foods. The production of meat, milk, dairy products, honey, leather, eggs all involves exploitation. The animals used for eggs and dairy products are killed when their production declines. Cows, chickens and other animals regularly get their families destroyed. Cow mothers get their babies ripped away from them within the first week of them being born. Air companies buy these products and distribute them to their flight customers. I went vegan when I realized all of this, since I didn’t want to be a part of paying for animal exploitation.

Is there any difference between this exploitation and the exploitation in vivisection? And if there isn’t, why do you boycott just Air France, and not every airline, since they all are based on animal exploitation? 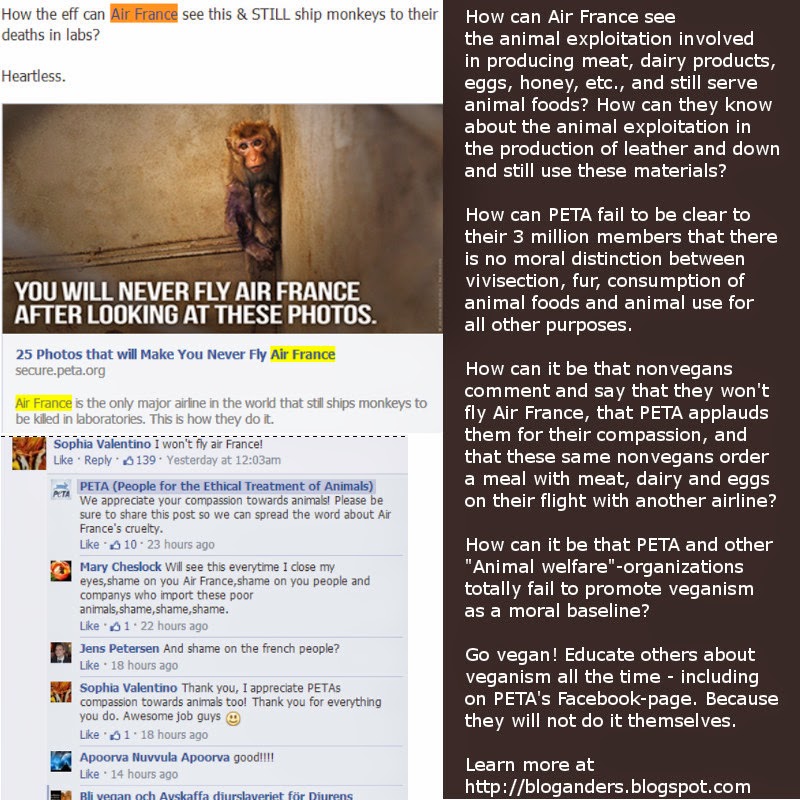 Posts sorted by language (In progress most articles are not labeled)

Anders Branderud
Ostfold, Norway
"“Thanksgiving dinner's sad and thankless. Christmas dinner's dark and blue. When you stop and try to see it From the turkey's point of view. Sunday dinner isn't sunny. Easter feasts are just bad luck. When you see it from the viewpoint of a chicken or a duck. Oh how I once loved tuna salad Pork and lobsters, lamb chops too Till I stopped and looked at dinner From the dinner's point of view.” Shel Silverstein "Animals do not 'give' their life to us, as the sugar-coated lie would have it . . . They struggle and fight to the last breath, just as we would do if we were in their place." [John Robbins]